Dave, who was 56, was an active volleyball player. Before the pandemic, he had been playing volleyball once a week. He had a slight weight problem that needed to be addressed, and one day he happened to be driving by Bent On Better and decided to give it a shot. It was a good decision. It has been over two and a half years since Dave first joined Bent On Better.

Dave, together with his wife, Eileen, both did the Disney Marathons, and though he was pumping on Advil every two miles during the run because his knees were so sore, his wife got him through it. He’s also been playing volleyball since his twenties and has been playing every week with their adult league before Covid hit, a passion he wouldn’t give up. But his knees would ache every so often, so he would pop an Advil and play anyway, only to be in pain for the next few days. He was also 15 pounds heavier than he is today, and with his age, he figured he should do something about it. He did sign up to other gyms before but never had the plan and the discipline to stick with it until he happened to stop in at Bent On Better, believing it was a yoga studio, set up a meeting, and decided to join.

Working Out at Bent On Better

Dave began to feel considerably better when he began working out at Bent On Better. The pain hasn’t gone away completely, but he hasn’t had to reach for an Advil in a long time. Whenever he performs an activity incorrectly, he seeks the assistance of his coaches, Nick or Alysha, who may either correct his technique or direct him to an alternative exercise. There was a time when they had to put the workout on hiatus for several reasons such as Covid, weather issues, and work. He could feel his energy levels dwindling after a month of not working out, so he committed to himself once again to get back into shape. After doing regular workouts and starting the barbell club, he set specific goals to hit on both bench press and deadlifts and reached those goals rather pretty early. He also hit his goals of benching his weight and he was able to refine both his technique and his strength without any discomfort.

Dave’s Fitness Journey: Building The Core And Forming The Technique

When asked about the changes between just starting out to advancing a different mindset this year, Dave says that the first year was all about developing his muscles and core so that he could work out properly. The following year, he continued to refine his method and saw significant improvements. To ensure proper form, he’d take his shoes off while doing squats to see whether or not his feet were positioned properly. Dave’s fitness journey was slow and steady, taking incremental steps to achieve one goal at a time, such as working on weight loss, building up his muscles and core, and finally integrating them all.

When it came to making the most of their fitness adventure, Dave’s best advice was to have fun.

“Have fun! Honestly, it sounds stupid, but I come here and it’s my happy place. I enjoy this! I come out here happier than when I came in absolutely 100%.” – Dave K.

Dave also recalls his first day at Bent On Better while still trying to figure out how things work out, and he finds these people all in a good mood and enjoying their workouts. Although everyone was on a different fitness path, everyone encouraged one another and looked out for each other.

“Whatever you decide to do, if you find joy in doing it, you’d be able to do it for a long time and it is something that is going to work well for you because it lasts a long time.” – Matt April 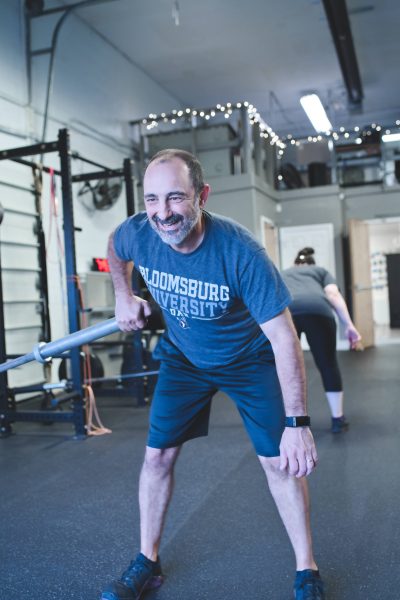 “We’ve all been through different routines, you can read the books, you can watch Youtube videos, you join the gym and figure it out yourself, and maybe that’ll work out. If you give this place a try, give it three months, come in here, try it out and I don’t think there’s anybody who ever walked away from here disappointed that they tried this place. It’s been such a great choice of my life that I was able to find this by chance. It truly is something  – your health, your mental health, and your emotional health have just improved so much and it does carry over into those other areas; to say it changed my life, people are going to roll their eyes, but it did.” – Dave K.