Ed didn’t start with a lot of confidence but had a fair amount of determination. Like most people, he wasn’t sure how to start. But he found his way to build self-confidence and now has so much energy that at the age of 64, he is lifting heavy weights with ease at the gym.

Ed was at his heaviest weight at 222 lbs. in 2017. He used to lift a lot, played ice hockey, and worked out every day during his younger years, but he gained weight, lost weight, and then gained it all back. When he saw 222lbs, he decided to finally start exercising.

Ed had met two Bent On Better members during a picnic, who urged him to join the group. As he hadn’t been to a gym in over two decades, he feared that it might hurt or be difficult.

“I came in and met with Matt and signed up 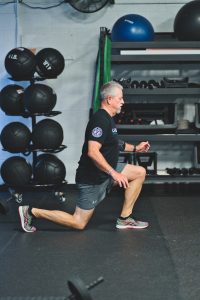 and I don’t know if it was the next morning or two mornings later but at 5:30 in the morning, I was in here (in the gym) and I really can’t do a push up unless I was on my knees, couldn’t do a sit-up for months after joining and then it happened. But the thing that I found was the encouragement of the people, the members, other people who didn’t know me. I think we were going into some challenge or something like that and they encouraged me. Their support was just overwhelming and kind of fueled my continuation or my mental thinking now that I can do this and it’s all worthwhile.” – Ed E.

With the help of the Bent On Better community, Ed was able to grasp his full potential. Although it was difficult initially, he had been entirely consistent in working out at the gym for the previous two and a half years that he felt more confident now than he had in the years before.

“You guys are so good at motivating without mandating. If you say that I can do more weight, you will encourage me to do more weight but it is not like you got to do more weight. I’ve got a physical issue which I did, you guys will work around that or tell me not to do this or ask me to do this and help me get through that little bit of an injury or whatever the case might be. I don’t know how to describe it other than it’s just pure enjoyment coming here “ – Ed E.

Stronger than ever at 64

It is fascinating to look back at how Ed started with a little bit of apprehension without having much experience and how he has evolved as someone stronger mentally and physically even at the age of 64. It doesn’t matter how often you’re defeated; it matters how many times you get back up. The best part is that there’s always room to start over again anywhere you are in life. By being open-minded and willing to take a chance, Ed reached a point where he is happy with his life.

“ I feel pretty good about what I’m doing and what I’m able to do at my age. Relative to everybody I work out with, I’m old and I can do very well here and not be pompous or anything, but I do what I think is very well for my age, let’s put it that way and it excites me. It makes me very excited when I’m doing a certain weight or something like that because it’s like holy cow am I really able to do that? So it’s pretty cool!” – Ed E.

A post shared by Bent On Better (Gym) (@bentonbetter)

About the Bent On Better community:

“You’ll meet a lot of tremendous people and this is the place that you want to do it and I’m not just saying that because I’m here but it this is the place that you want to do it because of the type of people that are running this like you (Matt) and Nick, and Alysha, and Molly and Lynn. Just the way that you care about everybody that is a member here and how much encouragement and professionalism and knowledge that you instill will help anybody start that journey and want to continue that journey and like I said it’s a life changer and I mean that from the bottom of my heart. Aside from all that good stuff, I’ve met a lot of friends here and a lot of really good people and it’s a good place to be.” – Ed E.